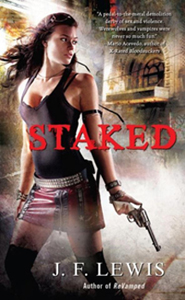 Murder is a fact of life for the vampire Eric, owner of the DemonHeart strip club in Void City, but when he kills a werewolf in self-defense, things get wildly out of hand. Though the local Alpha and his pack of born-again lycanthropes are out for holy retribution, they’re the least of Eric’s worries when he finds himself caught between his girlfriend Tabitha, who has always wanted to be a vampire, and her sexy little sister Rachel, a tantric witch with a hidden agenda.

Why can’t unlife be easy? All Eric wants to do is run his club, drink a little blood and be left alone. In his quest to discover who is trying to end him and why, he must survive car crashes, embalming, sunlight, tantric magic, and werewolves on ice as well as his own nasty temper, forgetfulness, and mistakes. Eric is willing to take on the world in Staked, a book where love just might conquer all, even if it is twisted, evil, and undead.

Staked is also available in Italian from Newton Compton and in French from Bragelonne!

“[Staked is] a gritty, violent and totally believable take on what being a vampire could be like… ” – Sidhe Vicious

“[Staked is] a fast paced rollercoaster ride of fun. Eric is not like any vampire I have ever met before and it was a joy to read about him. The story unfolds with twists and turns that kept me hooked till the end and I loved the way the story was told by both Eric and Tabitha.” – Amberkatze

“Staked will probably appeal to most readers who like Jim Butcher’s Harry Dresden but wish that Harry would stop being so damn nice all the time.” – LoveVampires.com

“This is the first Vamp book that I really enjoyed for its logical storyline and decent belief-suspension qualities…  Read the Scalzi feature and get the book.  It doesn’t disappoint.” – Frank Hagen 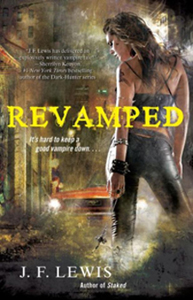 Revived. Refreshed. And ready for revenge.

Eric has lost his strip club, his Mustang, and even Marilyn, the love of his (mortal) life. Even his body was obliterated. In short, they almost got him. But when you’re a vampire, “almost” is a very important word. With a little magical help from his friends, Eric is restored to corporeal form, but his treasured Mustang gets caught up in the sorcery as well and ends up with an unlife of its own. Now, along with “Fang the Stang,” he’s out to save Marilyn from one of Void-City’s most powerful soul-stealing demons. But salvation comes at a high price, forcing Eric to venture into his own worst nightmare, Vampire High Society, to uncover the truth about the origin of his powers.

At the same time, Eric’s ex-girlfriend Tabitha, has begun to wonder exactly what it was that she admired about those High Society vampires in the first place. Her quest to find her own place in this deceptively vicious circle may lead her right back to Eric’s side, if her little sister Rachel doesn’t kill her first.

Eric will need all the help he can get, because it looks like someone is out for his soul, too. Blood will flow, fangs will be bared, and the claws will come out, because revenge is never pretty… and Eric has plenty to pass around.

“Vampire fans who like their blood and gore leavened with humor should enjoy the campy sequel to 2008’s Staked… Lewis’s creativity elevates this above similar outings.”
– Publishers’ Weekly

“ReVamped is a turbo-charged dark urban fantasy, with laughs, love, and lots of action. J.F. Lewis has a fresh and unique voice. If you haven’t read Staked, pick it up as well and read them together, you will be glad you did.” – SciFiGuy 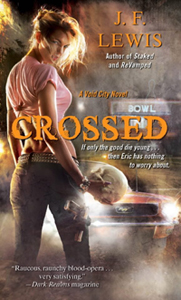 In spite of his continuing hot-blooded affair with his soon-to-be sister-in-law Rachel, Eric’s plan is simple: Give his vampire girlfriend Tabitha the fancy wedding she’s always wanted, then head off to Paris for their honeymoon in the hopes of tracking down his sire, the Empress vampire Lisette.

The City of Love proves anything but romantic when the True Immortal rulers of Europe try to block Eric from entering the Continent—and subject Tabitha to a series of challenges to prove her vampire worth. Back home in Void City, Eric’s volatile daughter Greta is getting lonely and bored—and that’s not good news for anyone.

When, like a bat out of hell, Lisette descends upon Void City to wipe Eric and his brood off the face of the earth—forever—this much is clear: the honeymoon is over.

Can we say how awesome it is that Bragelonne bought the foreign rights to this?

Violent, raunchy and hilarious, this third in the Void City series kept me caught in its coils from first to last. Although the narrative switches viewpoints with almost every chapter, J.F. Lewis kept the lines of action clear and concise and never lost the ability to spice even the most tragic scenes with a dusting of humor. –Fresh Fiction

“The Void City series is arguably one of the most well written paranormal fantasy sagas out there – the character development is truly remarkable (particularly the female leads Greta, Rachel, and Tabitha). Lewis’s ability to create an intricate storyline that is fluid and fast-paced is equally noteworthy, but it’s his narrative voice – intelligent, sarcastic, and unrepentant – that makes these novels so memorable.” –Paul Goat Allen, Barnes and Noble

Void City’s resident badass vampire has a secret to keep, everything to lose, and a plan to win it all. Eric has taken control of the city’s supernatural hierarchy, putting all the deals and contracts that allow Void City to function up for renegotitation. When he installs his insane vampire daughter, Greta, as Void City’s sheriff of the supernatural, bloody mayhem ensues.

To further complicate things, the love of Eric’s life is back from the dead, immortally young, at a cost that has put Eric under the thumb of a very powerful demon. The mysterious mouser Talbot, morose mage Magbidion, and all of Eric’s thralls are trying to help him keep things under control…

But with early onset Alzheimer’s, vampire hunters, demons, a band of chupacabra, a cursed cousin with a serious grudge, and Rachel as his new “handler”… there’s just not an app for that.

“This series just gets better and better with each book. The snarky irreverence and gleefully gory violence are turned up to eleven. The characters are even more sympathetically twisted than ever. I literally laughed out loud over and over again. Burned is quoteably funny and if the last chapter is any indication of what’s in store for the future I want to buy my ticket right now. ” – Pepper Thorn on GoodReads

“There’s a new sheriff in town, and she and her deputy will have heads rolling, literally!  Void City has got to be the most original vampire series to have come out in a very long time… Fans, new and old, will love Burned.  Full of humor and mayhem, absurdity and sheer brilliance, violence and blood.” (5 hoots- a Top Pick) Bibiolatryme

“Lewis has a real knack for character development, and readers will be swept away by Eric and his cohorts.  This is a fast-paced novel that roars out of the gate and doesn’t let up til the last page.” – Debbie’s Book Bag